The Cerrado is the largest tropical savanna region in South America. It is the second largest biome in South America and Brazil, with about 2 million km². Our biome connects with four of the five Brazilian biomes: the Amazon, the Pantanal, the Caatinga and the Atlantic Forest. Despite its vast wealth and importance, the Cerrado is one of the most threatened biomes in the world, with practically half of its original area already deforested. In 2021, according to data from the Instituto Nacional de Pesquisas Espaciais-Inpe (Brazilian Espacial National Institute for Space Research), the Cerrado lost 8,500 km² of native vegetation, an increase of 7.9% more than the previous year.

That's why we lead the RPPN creation processes from beginning to end. So far, 18 RPPNs have been created with our support and of local partners.

We are a reference in supporting conservation through support for the creation of RPPNs in the Cerrado biome. The RPPN creation strategy is fundamental for the Cerrado, as 80% of the land is private. Engaging these landowners to protect the remaining natural areas of cerrado is a condition for preserving ecosystem services, such as climate regulation, water availability and pollination, for future generations.

We understand that RPPNs are a strategic and fundamental instrument to expand the legal coverage of Cerrado areas, as they guarantee the perpetual protection of the area, without affecting the ownership of the property. That is, even if the property is sold, mortgaged or donated, the Natural Reserve area will be forever protected. This does not imply that the owner leaves the area idle, without economic activity, since by law some types of sustainable economic activities are allowed, such as ecotourism, scientific research and environmental education.

The creation of RPPNs is also an opportunity for dialogue and promotion for landowners to step up towards sustainability and environmental conservation.

According to Law No. 9,985/2000 and Decree No. 5,746/2006, RPPNs is one og the 11 categories of the Sistema Nacional de Unidades de Conservação -SNUC ( National System of Conservation Units). Since then, Brazil has become the first country in Latin America to include private reserves in its official system of protected areas. The RPPN is created by the rural owner and must have the documentation referring to the property up to date (Rural Environmental Registry - CAR, negative certificates, updated registration). Among the benefits for the owner are the exemption from Rural Land Tax (ITR) of the created area, priority in the analysis of agricultural credits and access to resources from the National Environment Fund.

We know that the process for creating a RPPN can be quite time-consuming and exhausting for the owner. Although we have a modern and unique legislation that regulates the creation of RPPNs, in practice, the creation process is still slow with bureaucratic steps and a complex model of deadlines, requests until the approval of the process. But this is no reason to be discouraged, as the Cerrados Institute leads this entire process until the final formalization and implementation on of the reserves.

The Program enables the creation of protected areas in private areas, through RPPNs, and in public areas, through partnerships with municipalities or states. We lead the RPPN creation processes from beginning to end. We follow all the necessary documental and administrative steps to convert a property into a Private Reserve. We offer assistance regarding the survey of land documents, support for the elaboration of maps of the Reserve and follow-up of the process with ICMBio.

In 2019, in the city of Pirenópolis -GO, through the Serra dos Pirineus Protection Mosaic project developed in partnership with Associação do Córrego Barriguda e Cabeceira dos Rio das Almas and funded by Nature and Culture International, we implemented the densest mosaic of Reserves in Brazil. Altogether, we supported the creation of 7 contiguous Private Reserves, totaling around 70 hectares that will be perpetually protected, ensuring the region's water security.

The Serra dos Pirineus Mosaic forms a protective belt on the banks of the Serra dos Pireneus where the main water source supplying the city of Pirenópolis, the Córrego da Barriguda, is located. 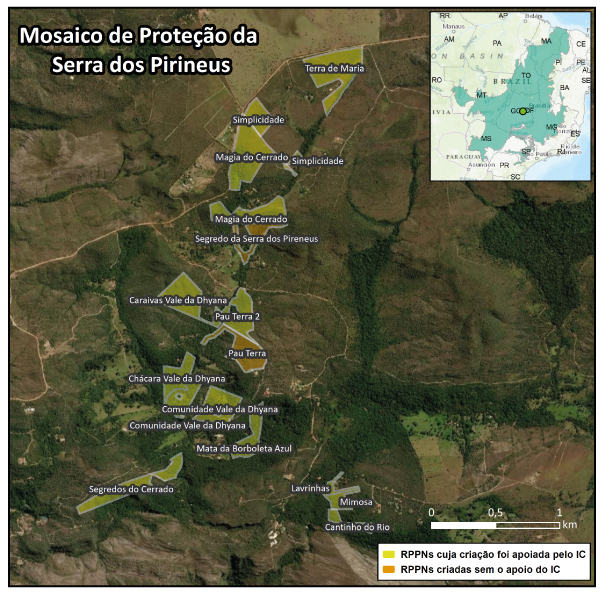 As a continuation of the Pyrenees Mosaic, in 2020, we started the 2nd phase with the support and creation of 5 RPPNs, in addition to actions to strengthen RPPNs that already existed in the region. On this occasion, we had the support of Nature and Culture International (NCI), the French Embassy and the French Alliance.

The Cerrado Private Reserves project aims to promote the conservation of natural resources by encouraging the creation, expansion and effective management of Private Natural Heritage Reserves (RPPNs). The project is carried out by Funatura in partnership with Cerrados Institute and funded by the Critical Ecosystem Partnership Fund (CEPF) and the International Institute of Education of Brazil (IEB).

The Project began in 2019 and so far we have supported the creation of 17 RPPNs in the state of Goiás, of which 10 are official with an ordinance published in the Union’s Official Gazette and 5 with the formalization process completed awaiting official authorization from ICMBIO

The Olho d'água project aims to protect and monitor Cerrado areas of unique importance for the provision of water in the Paraná River watershed. Through the creation of RPPNs, we will consolidate that cerrado areas are perpetually protected, in addition to mitigating the negative water impacts of deforestation and firein key areas for the protection of the basin.

For this end, the project is divided into two components: support the creation of five Private Reserves of Natural Heritage (RPPN) in strategic areas and actions to monitor impacts, such as deforestation and fires through the Suindara Alert Systems in 10 key territories for the conservation of the Paraná Basin. Our expectation is that by the end of the project, 1 million hectares of Cerrado will be effectively monitored and strengthened.

The Olho d’água project aims to engage landowners and conservation unit managers, strengthen processes for creating RPPNs, to implement and to capacitate users to use Suindara in the aforementioned areas. The project which will begin in January 2022, is an Cerrados Institute initiative with support from Coca-Cola Brasil.

Want to create your RPPN in the Cerrado?